Well, the long and short of it is, my spring veggies did AMAZING and my summer veggies have been okay at best, terrible at worst. Here’s how things are looking, and a harvest report.

All that’s left in this garden are carrots (right), peppers (middle) and one parsley plant. I moved these peppers because they were doing so poorly. I have a few small fruits, but the plants are tiny. Transplanting so late seems to have stunted their growth.

Lesson learned: if something is struggling, best to leave it where it is. I would have been better served by fertilizing (9-59-8) and adding egg shells more often. 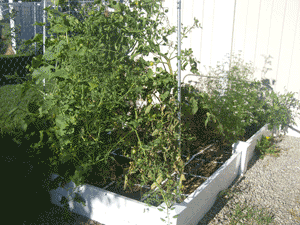 This garden bed has cucumbers on the left trellis, cherry tomatoes on the right. The tomatoes have gotten a little out of control, but so far they are the ONLY tomatoes I’ve harvested at all, so I don’t mind.

I’ve picked probably 8 medium to HUGE (whoops!) cucumbers, and we’ve loved eating them sliced with some salt. I’ve tried pickles in the past, and the truth is we never eat them. So this year I’m focusing on eating as much fresh from the garden as possible.

Check out my onion harvest (pulled from this garden): 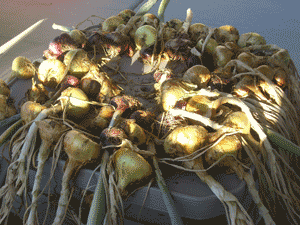 Once most of the onion tops fell over, I tipped the rest and let them sit in the ground for a week. Then I put them outside in the shade for another week. Here they are ready to be trimmed up and stored for the fall. I cut off the tops and the roots, brush off the dirt and then store in a cool, dry, dark place.

Someone gave me the tip to store in nylons–drop in an onion, tie a knot, add another onion, knot, until it’s full to the top. When you need one, just snip off the onion at the end. This keeps them dry and separate. Since I can’t remember the last time I actually wore nylons, I’ll have to get some cheap at Wal-Mart.

I harvested 25 pounds of onions from 12 squares. My yellow onions did FANTASTIC–here you can see the biggest one I grew. Fertilizing at 6″ and 12″ made a huge difference! My onions were much bigger this year. For some reason nearly all my red onions grew stalks and started flowering. They ended up being smaller and not as good as the yellow onions. Oh well, I’ll have to use them right away!

Here are my potatoes. As you can see, I’ve pulled a few stems and started digging for our dinner! This means I won’t have a very accurate count on how much we’ve harvested, but we love eating these straight from the garden. Can you blame me?

I can tell the potato season is almost over because the leaves are starting to yellow and fall over. They used to be lush and green and flowering.

Here you see the saddest tomatoes ever. I have three tomato plants: the Roma on the back left is so tiny, but it does have a few fruits. Last year my Roma’s got as big as the plants on the right! I think this might be a nutrient deficiency, because they are all sort of small and yellow. I just added egg-shell water and 9-59-8. We’ll see if these perk up at all.

The plant on the back right has blight: 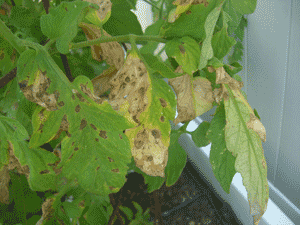 I should have caught this earlier, but at least it is treatable with anti-fungal spray.

The zucchini have been off again on again, failure and success. I got two huge fruits early in the season, then I pruned them. I think it must have shocked the plant because I didn’t get zucchini for a while. Now the plant is back to a pretty big size, and producing zucchini every 4 days or so. I have 4 just sitting on my counter!

This sad looking garden contains 5 pepper plants. The plants have finally recovered from the cool, wet spring and are nice and big. There are a few fruits, but not much to speak of. I’ve just fertilized these as well, so we’ll see how they do. I moved several pepper plants from this garden, and in the right four squares I had green beans. Those were a smashing success: I got 5-6 pounds of beans from 4 squares! We ate them nearly every night with a little butter and salt. YUM! 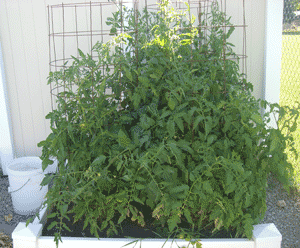 Now these tomatoes (4 of them) are my only hope for redeeming the summer veggies. They are relatively big and have bunches of fruit on them. I’m hoping to scrape at least one batch of salsa from these.