Back in February I started using a new method to “compost” my kitchen waste called Bokashi Composting.

I filled my bucket with scraps and Bokashi mix, which took about 2 weeks. Then I let it sit for at least two weeks. This is how it looked on March 8: 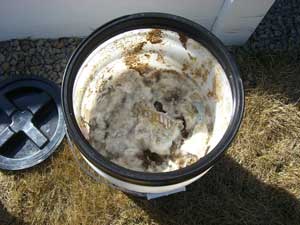 I took it out to my garden, and dug a big trench. Because I am expecting it to take some time to decompose to the point that it is safe for plants, I chose a bed that I know I’m not going to use in right away. 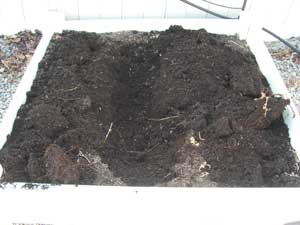 I poured it in–it does smell, but it doesn’t smell rotten.

And finally, I covered it with dirt. 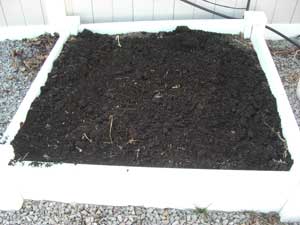 I dug around a bit every two weeks, just to see how it was breaking down. After two weeks, there were still significant amounts of recognizable material. After a month, I could recognize a few things (eggshells, 1/2 grapefruit rind), but almost everything else had fully decomposed. Also, I have quite a thriving colony of earthworms in my garden, and I watched to make sure it didn’t have a negative effect on them. None at all!

Considering it’s still cool, this is about what I expected. I’m hoping to see the decomposition process speed up as it gets warmer.

I started over again filling the bucket with scraps, layering it with Bokashi mix, and letting it sit for another two weeks. This past week I dumped another batch into a different garden bed. We’ll see how it looks in 2 weeks, and then in another month. That’s when I’ll be planting my tomatoes!

So, my evaluation so far:

I can definitely see the advantage of buying a kit so that you have two buckets going at a time–one filling and the other fermenting. Collecting enough scraps is easy, super easy, and I could consistently produce a batch of compost for the garden every 2-3 weeks.

My worry is that I won’t have space to put the compost when it’s done. I’ve found that realistically, it takes at least 8 squares in my garden to pour it into, and those squares should not be growing anything for at least 2 weeks to a month.  I am curious to see if I have 8 fallow squares at a time during the summer. Some have said I can add it to my compost pile, but allowing air into the mix reduces the benefits. Since I almost never turn my compost pile, I might try it to see if it’s a good alternative when my garden is full of plants.

I’ve evaluated whether it’s worth purchasing a kit when they’re so easy to “makeshift” an alternative. I’m leaning towards buying. As the food ferments it creates quite a bit of “tea” which you can dilute and add to plants as plant food. There’s no good way to do this with just a bucket. And, I definitely want two buckets going at a time.

So I’m off to buy my kit, and I’ll report more as the season goes along!