I decided that 6″ was not enough soil for me, so I’m upgrading to 12″ boxes.  I found out my old boxes will not “mix and match” with my new vinyl materials, so basically I’m rebuilding them. They are 4′x4′x12″ (instead of 6″ high). Cost:

Altogether, it will cost about the same to build twice as many boxes, twice as high as it did to buy the original 3 boxes from the squarefootgardening.com website. And I’ll sell my 3 boxes to a friend, and recoup a about a third of my cost.

The rails and came in 16′ lengths, so I used a miter saw to cut the rails into 4′ lengths. This was super easy.

I cut the posts down from 8′ lengths. I cut the posts to 14″–this left 11″ for the hole where the rail will go, with 1 1/2″ on top and bottom. This took at least two cuts on the miter saw, and I had to use a bigger saw that was tall/deep enough to cut it. Another option would be to use a jig saw, a table saw (it would take two cuts), a skill saw, or even a simple hack saw.

Here is my son building a “house.” His fun will be over when I actually set up my boxes! 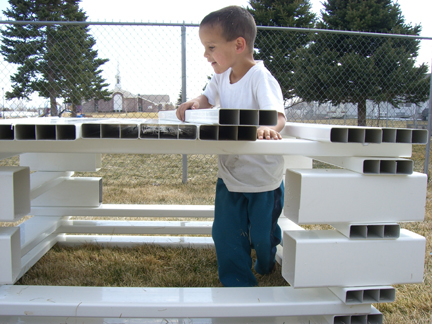 Next, I took the posts and marked a template for cutting the holes. I drilled a hole big enough for my router blade, then put down a jig to guide my router and finished boring out the hole. You could also use a jig saw, or perhaps even a combination of a skill saw and jig saw.

After that, it was a simple matter of assembling the rails into the holes, putting caps on the top, and filling it with soil.