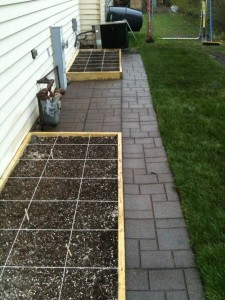 My name is Erin and I was a newbie last year…  We tore out a big concrete pad in order to make these two beds. All of the pictures were taken right after we completed the project, so there are still some areas that are lacking sod surrounding the project. We built two 3’x7′ raised bed gardens. We also bought a large planter box that is 3’x18″ and about 2′ deep. They are filled with about 1/4 of each of the following: topsoil (from DuPage Topsoil), peat, compost (various types from Menard’s/Home Depot), and perlite & vermiculite. The vermiculite was a little pricy so I made some substitutions. We have since added a trellis along the sides and back of the eastern most bed. I have two large stakes in the western bed for staking summer squash. The beds are surrounded by rubber pavers which are not so easy to install and make level but are much nicer on the knees than concrete.

I would say I had decent results my first year and definitely learned a lot. My beets and carrots did awesome, they were configured a little differently than this year, I alternated beets, onions and carrots. This year I think I will keep them all together to make them easier to pick, etc. I might also stagger planting the beets, because we had so many and I like the beet greens a little more tender.

I started the tomatoes, peppers, and squash indoors. I did not have a grow light, only a southern facing window. My tomatoes did ok; they were kinda small but I think it was just the type I planted. I think I will try heirlooms this year in addition to some of the same plants I did last year. My jalapenos did well but peppers were on the small side. I bought an eggplant transplant and it did nothing. This year I got a grow light for the tomatoes/peppers/eggplant to start them indoors and will plant everything else from seed outside.

I also planted marigolds intermittently throughout both beds as we have lots of bunnies.

The small box all the way to the north I use for lettuce and spinach as it’s partially under the awning and up a little higher and the bunnies have a harder time accessing it. Oddly enough I still have spinach growing in it; it’s been a warm winter here. 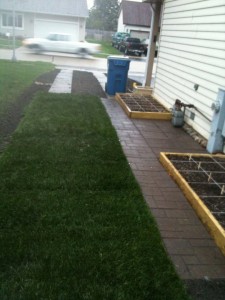 So here is this year’s plan:

I plan on planting the beds  more densely than last year. I didn’t plant anything between or behind the summer squash (same location as last year) but I think I could have done cool crops such as carrots and beets. Thoughts?

I have a spin bin, but haven’t gotten much in the way of quality compost out of it yet. I think it needs more water and more rotating. Any advice on getting decent compost from one of these things is appreciated!!!