My name is Cyndee and this is my first garden.  When I was a little girl growing up in New Jersey, we had a backyard garden, mostly with tomatoes and peppers, but we tried a few other things as well.  I used to help take care of the plants and the smell of tomato plants brings back a powerful nostalgia for me.  I have wanted to start my own garden for a long time, but my efforts at container gardening in apartments fell short.   Tomatoes are quite difficult to grow in containers in Texas because of the extreme heat; they dry out very quickly.  Also, as I later discovered, the containers I was using were far too small.  I have wanted to start a garden since we bought our house in 2009, but life kept getting in the way and the start up tasks and costs seemed overwhelming.  This year we are finally doing it although I am not sure how much we are actually going to harvest given numerous screw ups and challenges already!

We have a very small lot (.17 of an acre), so we’re just doing two beds, plus a small herb garden against one side of the house.  We built our 4’x8′ raised beds of 2″x12″ pine.  I also included 4″x4″ support posts in the corners, but I kept them a little taller in case I wanted to put some kind of cover over the plants in the winter.  I would rather have used cedar, but it wasn’t available in the sizes I needed.  I read some recommendations against using peat moss in my area, as it dries out too quickly, so we used a bulk veggie garden soil from a local supplier, which included compost and some other amendments that are recommended in my area (expanded shale, Texas greensand).  Anyway, as I have since discovered, the presence of uncomposted wood chips in this soil is quite a problem so I do not recommend it. Here’s my garden so far: 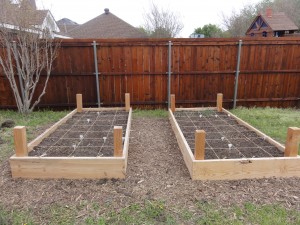 I’m following a planting calendar recommended by a local community garden, but the extremely unusual heat and almost non-existant winter in the past year has me worried.  I planted my winter veggies on Feb 26, which is on the late side, and they are growing extremely slow and having some pest problems, so I’m not sure if they’re going to make it.  I’m trying to decide if I should go ahead and plant summer crops already or wait until April.

The back wall will be used for vining plants and I need to build some kind of trellis.  I am thinking about 6 feet tall, which would make it as tall as the fence.  Suggestions appreciated!  I have heard good things about cattle panel.

Here is my garden plan – I got a little crazy with clip art on a rainy day! 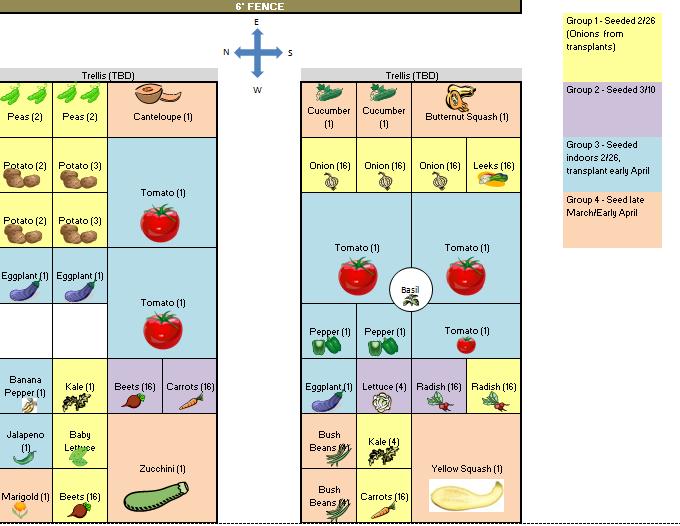 I tried to follow companion planting as best I could, but with limited space, it was difficult.  I put cool weather crops around the squash to give it room to expand to the 3×3 space recommended.  Similarly, the melon will have room to expand all along the trellis when the peas die out in the summer.  I had originally planned 1 square foot for tomatoes, but on further research, this seemed unrealistic, so I had to lower my amount of tomatoes and give them 4 square feet.   I’m hoping eggplant and peppers can fit in 1 square foot, but I guess we’ll see.    I will fill in any empty spaces with marigolds and basil.

Unfortunately since I started planting, my excitement has turned to frustration. 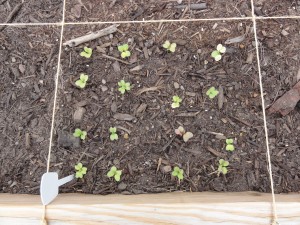 1.  Nothing is growing. This stuff has been in the ground almost a month and it’s growing anemically.  Here is a picture of my radish plants, 3 weeks after planting.  It really started to hit me that something was wrong after seeing this, since I should be harvesting them in a week.  They are kind of yellow, there are small holes in some of the leaves and some white lines.  None of my seedlings have really done anything since they popped up.  After doing some more research and doing a cheapie soil test, I discovered that the soil I purchased is actually quite deficient, despite supposedly having a lot of compost.  I think it’s the wood chips.  I fertilized this past weekend with Gardens Alive organic fertilizer, but I am not sure if that is enough or if it’s too little too late. I plan to add some amendments which will hopefully be enough for my summer veggies, but it’s probably too late to save most of my cool weather veggies. 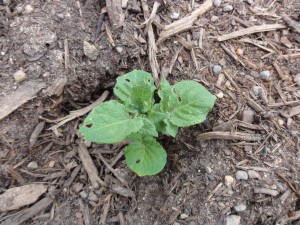 My poor potato plant is being eaten alive.

2.  Pests.  Fire ants have TAKEN OVER the beds.  They are everywhere.  I drenched raised mounds with orange oil, which did kill some, but obviously not all.  I spread molasses, which has done nothing to deter them.  I ordered some spinosad baits and fingers crossed they will work.  Something is munching on my plants, but I can’t see the culprit.  Witness the potato plant at right.  These have actually been growing decently but the leaves are getting chewed up.  Whatever it is, I can’t see it on the leaves.

My snap pea plants also started strong but have flamed out.  There was some leaf chewing in evidence, as well as brown spots on the leaves. The pellets you see are slug baits, as I read that it could be slugs and I saw some slime on the surface of the soil.  My snap pea plants are looking worse by the day which is sad because I really wanted fresh snap peas.

I’d love any input on the problems I’ve been having so far. I am not sure how much of the problem is pests, or soil or what. Do you have any idea what could be attacking my plants? How can I fix my soil organically and quickly?

Also, any southern gardeners, have you used shade cloth?  My garden faces west which concerns me, I’ve heard some plants can get heat scald from being in direct sunlight all day in the summer heat.

Finally, if you use drip irrigation, how long do you leave it on for and how often?  I’ve been hand watering so far because I don’t have much planted yet and I just haven’t had a chance to set up my drip irrigation equipment.  But I’ve heard that  slow, deep watering is essential.  I feel like I’m not doing a good enough job at that right now.