Growing Vertical–How to Support Your Plants

One of the biggest advantages of Square Foot gardening is that you can grow more plants in less space. However, if you don’t provide the plants with adequate support they will fall over, or sprawl ver the entire garden box, and you lose what you gained!

I’m going to show you several methods of supporting your plants so you can “grow vertical” and fit even more into less space.

This is the way I prefer to support peas, cucumbers, and some varieties of tomatoes. I use a trellis made of galvanized steel that I purchased through the SquareFootGardening.com website. To install it, I pound two pieces of rebar (included with purchase) halfway into the ground, and then slide the tubes over the rebar. I shove the whole thing down an inch or two into the ground, and it’s ready to go.

with 6″ openings. I find that I need to replace the netting every 2-3 years. When the plants start to grow, I wind them through the netting, and use garden Velcro tape 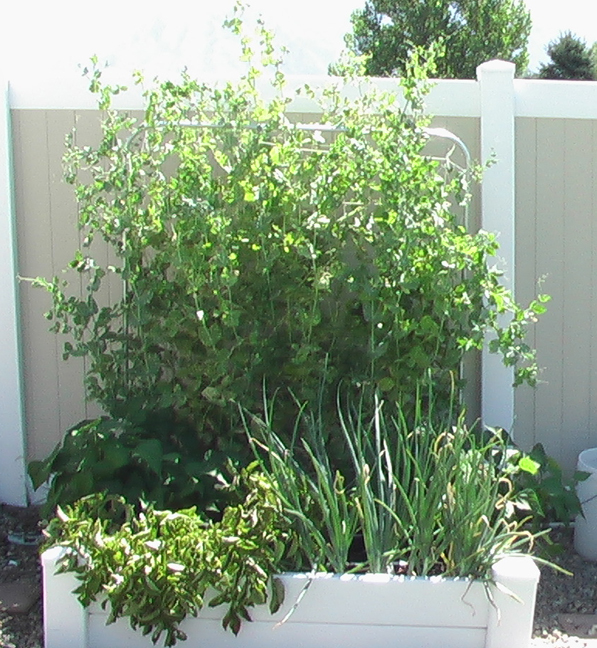 At first, I put my trellis against the fence, but that made it hard to train the peas to go up the trellis, as well as to harvest. 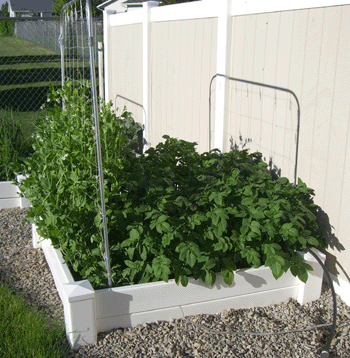 Now I put my trellis in the front. You can do it this way, or perpendicular to the fence. 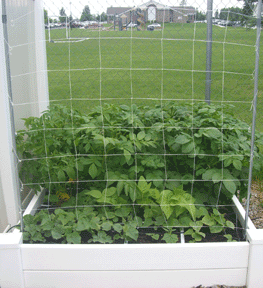 On the left I have cucumbers and tomatoes on the same trellis. I found that they were always competing for space, and didn’t yield as much as I wanted. So the next year (on the right) I planted 4 squares of cucumbers and gave them the entire trellis. You can see them just starting to grow, with potatoes in the background.

The potatoes and cucumbers grew well together–the cukes liked the shade from the large potato plants. I had more cucumbers than I knew what to do with! It is really important to train the cucumbers to go up the trellis or they’ll just sprawl horizontally. It’s helpful to wear gloves–they’re prickly! 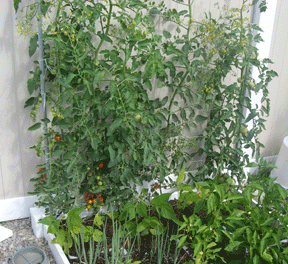 In my very first square foot garden, I grew tomatoes in one square each, and trellised them. As I already mentioned, the trellis was against the fence, which made it difficult to train, prune, and harvest them. With such limited space, I had to prune them regularly or they’d go out of control. I had great tomatoes, but not many of them. So now I only grow cherry or grape tomatoes this way. I give them 2 squares each, and prune them down to 3 or 4 main vines. 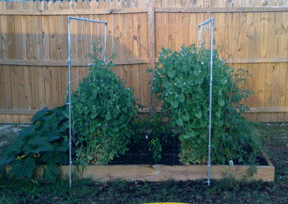 As I’ve mentioned, I learned to place my trellis perpendicular to the fence so I have easier access. But you don’t have to put them only on the ends of your garden. Richard, who uses the Square Foot gardening method in Louisiana, gives a good example of this. I have to say, I’m jealous of his garden, since it’s still snowing in Utah!

I’ve never tried it, but you can grow watermelon, cantaloupe, pumpkins, and winter squash on a trellis like you would tomatoes or peas. My friend reports that you just train the plant up the trellis, then back down again, making an “M” pattern. Use gloves, because they can be pokey!

I have found a method of growing squash and cucumbers that I love. 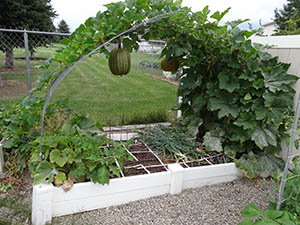 This is one piece of cattle panel I purchased at my local ag co-op. I tucked it inside the sides of a 4’x8′ bed, pounded rebar stakes into the corners, and wired the trellis to that. It’s amazing. The vines grow strong enough to support the fruit–this pumpkin weighed in at 20 pounds!

This doesn’t work as well with peas, because they want to grow straight up. 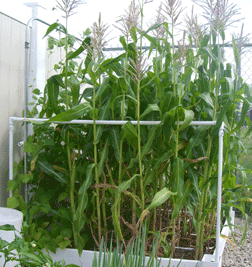 My very first square foot garden I decided to grow corn. But since the soil is so loose and soft, it doesn’t offer enough support for corn, especially in an area as windy as mine.

So I rigged this horizontal trellis using PVC pipe, elbows, and nylon trellis netting. It did a great job, but in the end I decided that I didn’t harvest enough corn to justify dedicating a whole box to it.

No matter how expensive or fancy, I have yet to find a tomato cage that adequately supports indeterminate tomatoes–until now! One of my readers sent these photos of her tomato cages, and gave me instructions on how to build them. They are 5′ high, and can handle the largest of plants! 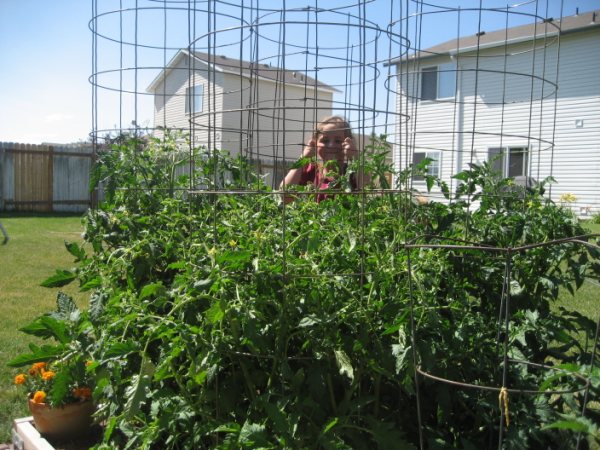 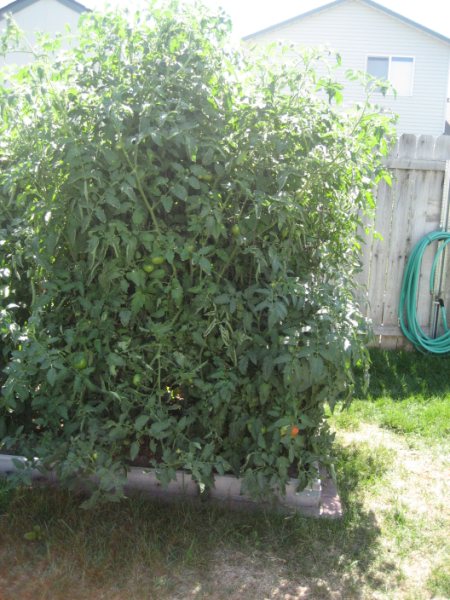 These are made with steel remesh, and have 6″ openings, which makes it easy to reach in and harvest tomatoes.I think the best aspect of these tomato cages is that they fit in just 4 squares of the garden. This truly takes your tomatoes up, instead of out, and saves tons of space. 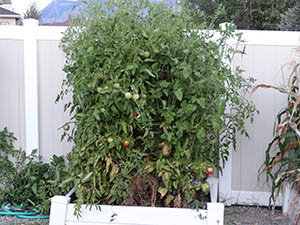 I’ve converted to this system of supporting my tomatoes–here is a 4’x4′ bed with 4 tomato plants in it. They look like trees, and start growing over the fence!

Another method of supporting tomatoes is to stake them. Generally, you pound a 6-8′ stake into the ground, then plant your tomato plant 3″ away. It’s best to have the stake on the north side, so it doesn’t shade the plant. As the plant grows, tie it to the stake with old pantyhose (does anyone really still wear those?) or garden Velcro tape.

Similar to growing tomatoes on a trellis, when you stake tomatoes you have to prune them diligently. You will get less tomatoes, but they will ripen sooner and get bigger than if you let them sprawl.

Peppers can also be staked, using shorter, 2′ stakes. Technically, they don’t have to be staked, but it helps if you have a lot of wind (like I do). Again, put the stakes in just before you plant, so you don’t damage the roots.

Sorry, no pictures because I’ve never used this method.

No matter which method you choose, be sure to offer your plants some support! Not only will it save you space, it will keep the fruits and veggies from rotting, scalding in the sun, and getting lost a mass of sprawling greenery.