I cannot tell you how excited I am to share Jacki’s garden plans with you! She is using some awesome techniques to extend her harvest. 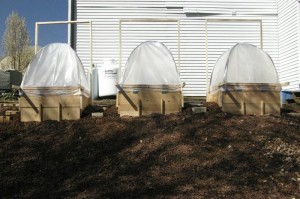 “This is our boxes from the south side of the yard, with their dome lids that we created. The idea of the domes was to be able to transplant our seedlings earlier, keep in warmth at night as they established themselves, and then in the fall to expend our growing season.”

The row covers allow Jackie to start seeds outside earlier, transplant earlier, and then HARVEST earlier! The same is true in the fall–she can continue to harvest well past the first fall frost. Keep in mind that plants grow more slowly in the fall, and must be mostly grown by the time frost comes. By protecting the plants you can continue to harvest them for weeks, and in some areas, even months.

If you can believe it, the big concern with row covers or cold frames is making sure the vegetables don’t get too hot. During the day you may have to prop them partially open to allow the air to flow.

Here, Jacki has them fully open during the day, and just closes them at night for protection from the cool temperatures. This will help tremendously with tender and very tender vegetables like tomatoes and peppers.

Aren’t you jealous? I know I am!

Here is Jacki’s history and her square foot gardening plan:

“Last summer was our first year doing any type of gardening at all. We had soil delivered, and it ended up being very poor quality. It was mostly clay, and had a lot of stones in it. After the expense of the build and the soil, we couldn’t afford to amend the soil properly, so we just tried to work with what we had.”

“In addition to having terrible soil, we also did not know when to plant things. We started our tomatoes and peppers inside in February (we were too excited, got a little ahead of ourselves), so by the time we put them out they were spindly and ragged, having spent 3 months trapped in tiny little containers. We directly sowed spinach and various greens in May, so by the time they grew to anything they basically just bolted right to seed. Our peas sprouted and immediately withered and died, same with our beans.”

“After a disastrous growing season, where really we got only lots of hot peppers, we gave up on our plans to plant greens in the boxes at the end of the summer and try to grow them into the winter with the dome lids on. Instead we took the compost we had been making all spring and summer and used it to amend the soil as best we could. We dug out the top 6-8 inches of soil, and replaced it with a mix of compost and peat moss. We were only able to do that in the Left and Center boxes on the spreadsheet, then we ran out of compost. We left the Right bin as it was. We added a layer of shredded leaves on top of each box and left them to sit over the winter.”

“We decided to grow the salad greens in the Right box this summer, as we think they don’t need to have as extensive of a root system as the other plants do. We’re planning to add some soil-free mix or potting soil or something to the part with the trellis at the very least.”

“I think the most important thing we’ve done this year is to subscribe to your newsletter, so we’ll actually know when to plant things!”

And finally, her questions:

Leave your comments and advice below!

Learn how to create your own square foot garden plan.